It’s a funny, possibly apocryphal story that should make us think about why we do things the way we do. What brought this story to mind was a hilarious diagram of fake org charts I saw on Seth Godin’s blog: 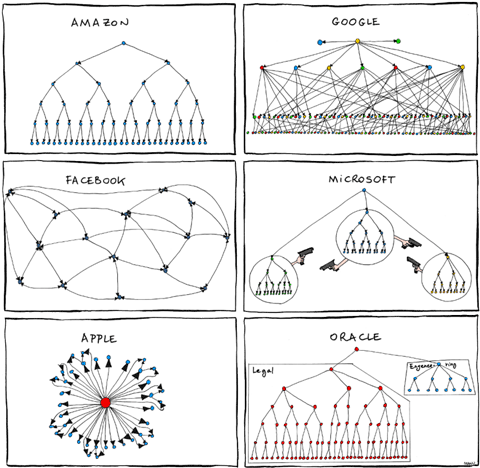 Besides being a funny poke at a few corporate cultures, Seth also suggested that it “might help you think hard about why your organization is structured the way it is. Is it because it was built when geography mattered more than it does now? Is it an artificact of a business that had a factory at its center? Does the org chart you live with every day leverage your best people or does it get in their way?”

Which got me thinking about churches. Churches aren’t businesses, of course, or merely “organizations.” And churches need to to take tradition more seriously than businesses, because our faith isn’t something we invented, it is something we received. There is wisdom embedded in tradition that we ignore to our peril.

Of course, having a structure doesn’t make a church. The Spirit creates the church, and its purpose is to be a dwelling place for God on the earth. But every church, no matter how “organic,” is structured in some way, because there is no community without structure. And the structure we establish can either facilitate or hinder the life of the Spirit operating in the community.

Tomorrow evening at our worship gathering I’ll be talking about why we are structuring our church plant as a network of mid-sized Missional Communities. The short answer is that I believe it is one of the best ways we can “do church” like Paul talks about it in the New Testament: every member of the Body of Christ using their Holy Spirit gifting for the benefit of everyone else. The question we have been asking was, “How can we structure ourselves to facilitate these kinds of things happening?”

So I wonder: have you ever thought hard about why your church is structured the way it is? What values are being silently promoted by the way you gather, what you spend money and time on, what is celebrated? What does your structure allow and prohibit? What does it make easy and difficult? What kinds of results (fruit) are you getting from it? Do those things line up with God’s values for his church? Perhaps it’s time to start asking why we cut off the end of the ham.