The title of David Fitch‘s latest book makes for a great blog post title, doesn’t it? Also makes for a provocative book title, which I hope makes it sell more copies, because it’s a really good book. I recently finished reading it, and while this isn’t really a proper review, per se, I wanted to offer a few reflections on the book.

I’ve known David for a few years now, and his first book, The Great Giveaway, shaped my thinking and practice in significant ways. He gave language for the vague feeling of unease I had about the way church was normally practiced, and didn’t just talk about what was wrong, but pointed a way forward! It was a breath of fresh air. 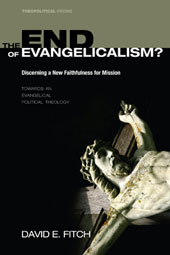 The End of Evangelicalism? is a similar book in all of those ways, and more. Like Giveaway, End is written for practitioner-thinkers. Non-practicing thinkers probably won’t like it (too pastoral), nor will non-thinking practitioners (too theological). As Fitch warns us on his blog, “there’s some intense political theory in this book alongside some intense theology.” The book is written in such a way, though, as to make it accessible to those with no formal theological or philosophical training, so don’t let that scare you away.

Basically the book is a subtle, astute diagnosis of much of what ails the current popular expression of “evangelicalism” in America. By using some philosophical categories from Slovenian philosopher and critical theorist Slavoj Žižek and abundant examples from yesterday’s news headlines, Fitch shows us how much of what evangelicals have been clinging tightly to is actually empty at its core, and why this is disastrous for mission. The main sections of the book are centered around a typical evangelical belief/practice and how they shape us in ways that are counter to faithful, missional living.

But the book isn’t simply a diagnosis of the problem, it’s also a prescription for healing. If what we have embraced is empty, Fitch attempts to point us forward toward a “politic of fullness.” If what we have been believing in and practicing is leading us away from mission, Fitch attempts to steer us toward a new faithfulness for mission, which is what I like about the guy, and what I like about this book.