Christmas is an easy time for Christians to get sentimental and schmaltzy, so in the interest of remembering how radically earth-shattering this event was, here are some thoughts on the Incarnation of Christ from N.T. Wright:

How can you cope with the end a world and the beginning of another one? How can you put an earthquake into a test-tube, or the sea into a bottle? How can you live with the terrifying thought that the hurricane has become human, that the fire has become flesh, that life itself came to life and walked in our midst? Christianity either means that, or it means nothing. It is either the more devastating disclosure of the deepest reality in the world, or it’s a sham, a nonsense, a bit of deceitful play-acting. Most of us, unable to cope with saying either of those things, condemn ourselves to live in the shallow world in between…

Here’s Augustine with a meditation on the Incarnation. More ancient words to meditate on during these days of Christmas. (ht)

By the way, the connection he makes between the Incarnation and the crucifixion is an important and traditional one that helps us not sentimentalize Christmas. If you look closely at Luke’s account of the events surrounding the birth of Jesus, they are tinged with a dark foreshadowing of the events to come.

Man’s maker was made man,
that He, Ruler of the stars, might nurse at His mother’s breast;
that the Bread might hunger,
the Fountain thirst,
the Light sleep,
the Way be tired on its journey;
that the Truth might be accused of false witness,
the Teacher be beaten with whips,
the Foundation be suspended on wood;
that Strength might grow weak;
that the Healer might be wounded;
that Life might die.

This is a picture of an actual church sign I saw in Fort Wayne the the other day: 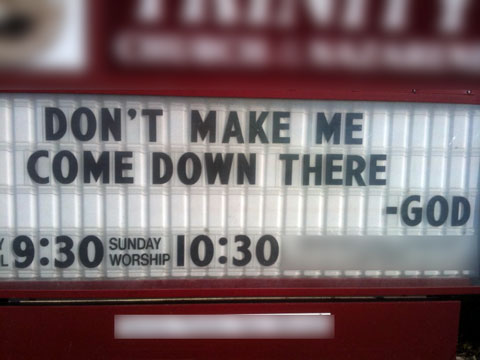 No doubt someone simply thought this would be kind of funny, but it reinforces so many of the pre-conceived notions people have about God that keep them away from the church. It was probably meant in fun, but this is an epic FAIL. On so many levels.

Frankly the god who would say the words on this sign has nothing to do with the God and Father of our Lord Jesus Christ. This is moral therapeutic deism without the therapeutic part.

So much of how we frame and live out the Christian life comes back to our view of God. This is why it is so important to, in the words of Dallas Willard, “enthrall the mind with God.” To bring his revealed character before our minds often, to soak ourselves in the reality of who he is, meditating on what he has done, what he is like.

The missional church will never get a lot of traction until people have a view of God that differs radically from the one who would say “Don’t make me come down there!” We have to be converted to the God who did come down there, not to dish out punishment, but to take it, not to scold but to seek and save the lost, the God who conquered death through his own death (“trampling down death by death” in the words of St. Chrysostom), the God who is always working (John 5:17) to renew everything (Rev 21:5).