I am currently on vacation. I am getting some rest, feeding my soul, and enjoying time with my family. While I am not blogging, I thought I’d re-publish a few of the more “pastoral” posts from the past 18 months or so. I hope you enjoy them!

One of the things I like to do from time to time on this blog is simply reflect on the portions of Scripture I’ve been meditating on. This morning I was reading Luke 22:24-32, where Jesus is trying to have an important final dinner with his disciples before his crucifixion, but his disciples are busy arguing about “which among them was considered to be the greatest.”

Jesus first describes how “the kings of the Gentiles” rule. They “lord it over them” and consider themselves Benefactors; they want to be in charge, tell people what to do, and have everyone fawn over their graciousness and generosity. In other words, their ambition is to be thought of as “great.” Jesus pretty firmly contrasts this with how his disciples are supposed to act: “You are not to be like that” are his exact words. Instead the greatest among you should be like the youngest, and the one who rules like the one who serves. Radical, counter-cultural stuff the church has yet to practice consistently.

However, what caught my attention this morning was that immediately after this, Jesus warns Simon Peter that Satan had asked to sift them all like wheat. Mentally I’ve never put these two texts together, but they are really part of the same passage that began with the dispute about who was the greatest. In other words, Jesus isn’t giving Simon an isolated warning about something unrelated to the situation at hand. In fact, the opposite is true: the fact that they were about to be sifted like wheat had everything to do with their undisciplined ambitions to be “the greatest.”

Their obsession with honor in the eyes of man would make them unwilling to suffer with their Lord. Their ambition to receive the accolades of human beings would cause them all to abandon the one they called “Lord” when he was being spitefully spat upon and abused. Simon’s desire to be “great” was the reason he would deny his Lord when the chips were down. They did not yet love their Lord as much as their own reputations. They had not yet learned to humble themselves and simply receive what their Lord would give them, whether it be suffering or comfort. 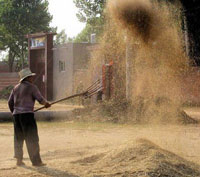 The sifting was necessary, though, to expose the disease and root it out. Sifting is a turbulent process of separating the pure from the impure, the useful from the useless. Jesus doesn’t pray for his disciples to be spared the sifting. He doesn’t reach magically into Simon’s soul and “fix” him so he wouldn’t need to go through it. Instead Jesus simply says, “But I have prayed for you, Simon, that your faith may not fail.” He is so confident, too, that this prayer will be answered, that he says, “And when you have turned back, strengthen your brothers.” Not if you turn back, but when you do.

This doesn’t mean that sifting isn’t dangerous. Judas is the starkest example of this. But sifting is necessary to expose hidden motives and dig up rocks under the surface that are choking out the life of the kingdom. When we respond to this kind of sifting like Simon did, with confession and repentance, the result is a deep work of grace that allows us to walk with God in a new humility, freeing us up from our own ambitions so we can truly love our Lord, even when it leads to humiliation or worse, and truly serve others, even when it means performing the most menial tasks for them. 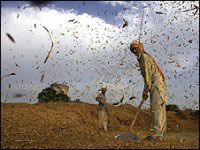 We no longer serve the tyrant ambition, because we know that Jesus has conferred on us a kingdom that we didn’t earn. It’s just a gift and he will figure out who sits where and what our responsibilities will be, but we know we all have a place at the table because of his mercy. The greatest is then free to be like the youngest, and the one who rules like the one who serves. The one who submits to the sifting is the one who can truly bless and strengthen their brothers and sisters, because they are free from the need to dominate or control them. Like Cornel West says, “You can’t lead people unless you love people. You can’t save people unless you serve people.”

So if you’re in a sifting season, don’t resist it. Instead welcome it as God’s discipline, rooting out ambition and purifying your love for Christ. Allow yourself to be brought to nothing so the power of God can flow through your life unhindered to bless and strengthen those around you.