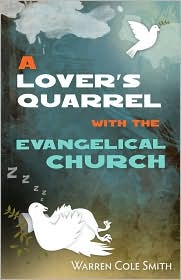 I just finished reading Warren Cole Smith’s book A Lover’s Quarrel with the Evangelical Church, and wanted to post a few thoughts about it.

If there any criticisms to be leveled at Smith’s book, he tends to root many of his arguments in the same few sources, almost all of which come from a Reformed theological tradition. But his argument is nonetheless convincing and I think his diagnosis is correct: unless these pathologies are dealt with, American evangelicalism will die (at least in its current form), which, of course, might be a good thing.

Smith doesn’t stop there, though. He goes on to offer a remedy, and that remedy is rooted in church planting. Instead of monolithic churches growing larger and larger, putting more and more people under one roof, he advocates planting more and more churches (a man after my own heart!). The advantages are many, according to Smith:

I wholeheartedly agree. It was refreshing to read a book that seems to diagnose the problems well and advocate a solution that lines up with the way we are attempting to plant our church community here in Fort Wayne.

EDIT: I have one more criticism of Smith’s book: he lumps “emerging” church into the same lot as Joel Osteen, which betrays a severe lack of understanding about where most of these people are coming from. It is one of the issues that Jim Belcher pointed out in his book Deep Church, namely that “postmodernism” means two different things, depending on who you are listening to. Most “emerging” church folks point to post-modernism as a break from modernism, while others (like Smith) see post-modernism as an extension and strengthening of modernism: hyper-modernism. In this way, many times the two sides talk past one another, when in actuality they agree on a lot.