(The following is an adaptation of an Advent sermon I gave several years ago.)

Today is the fourth (and final) Sunday of Advent. Advent comes from the Latin word adventus, which simply means “appearing” or “coming.” Throughout this brief season that inaugurates the Christian year, we’ve been preparing for the appearing of Jesus at Christmas.

God Keeps Coming To Us

The way God comes to us is an important theme of Advent, because it’s easy to let the sentimentalism of the season get the best of us. We think of Baby Jesus the same way we think of babies in general: cute little bundles of joy to dote on and take care of. But this almost always sets us off in the wrong direction.

Often we’re like Ricky Bobby, Will Ferrell’s character in Talledega Nights. While saying grace before a meal, he keeps addressing his prayers to “little baby Jesus.” Eventually his wife interrupts the prayer and says, “You don’t always have to call him ‘baby.’ It’s a bit odd and off-puttin’ to pray to a baby.”

Ricky responds by saying, “Well I like the Christmas Jesus best… I like the baby Jesus, so that’s the one I’m praying to: Dear Lord Baby Jesus, sitting there in your little ghost manger, looking at your Baby Einstein developmental videos, learnin’ ’bout shapes and colors…”

But the Christmas story is actually kind of dark. It is a blood-and-guts story of strange visions, disturbing angelic visitations, sacrifice, subversive songs of throwing tyrants off their thrones and lifting up the humble and hungry, political intrigue, escapes in the middle of the night from certain death, a young couple becoming sudden refugees, and insane tyrants commanding horrific massacres.

Don’t let the sentimentalism of Christmas deceive you. Welcoming God is not like cuddling a baby. Don’t pray to little baby Jesus during Christmastime!

This story of God coming to us in Jesus isn’t a sweet, saccharine after-school special. It’s a story about massive upheavals in the status quo. It’s about disruptive, eruptive joy and laughter. It’s about the seismic, earth-shattering shifts that take place when God begins to fulfill his promises. And for some reason, it’s always difficult to recognize when God is fulfilling his promises, because they never quite happen in the way that anyone expects.

God Is Not Great At Marketing

When we lived in Indiana we would drive 10 hours back to Minnesota to visit family every Christmas. Along the highway, of course, we saw all kinds of signs. Signs are promises, indications of what to expect in the future, symbols that point to a reality further down the road.

When we saw the logos for the restaurants and gas stations on each exit, we knew what to expect at those stops. When we saw the Starbucks logo, we knew that we could expect the opportunity to purchase coffee that would taste very similar to the coffee we get at every other Starbucks.

The sign makes a promise, and the coffee shop fulfills the promise. It’s all very predictable ways. That’s why we like franchising. We know what to expect. It lowers our risk.

But God doesn’t seem to have taken a course on branding or franchising when he was in college. Because the promises he gives don’t seem to predictably line up with the fulfillments he brings. He doesn’t seem to share our value on predictability in advertising. His fulfillments always seem to be somewhat alarming, difficult to understand, disturbing. It’s amazing how often in the Christmas story angels have to tell people not to be afraid.

Through the prophets, God promises a king who will be like a good shepherd. He promises victory for Israel, the end of oppression, judgment for the wicked, redemption for the righteous.

But when God gets ready to bring the fulfillment, he doesn’t go to the important places you’d think he would. God doesn’t visit Herod at the palace or inform the priests at the gloriously rebuilt temple. He doesn’t go to Jerusalem at all, avoiding the important cities in Palestine.

Instead the Christmas scene takes place in an unimportant hick town most people had never heard of, with an angelic messenger is sent to visit a girl (a GIRL!) and proclaim the fulfillment of this long-awaited promise. In a patriarchal society that valued maleness, wisdom, and old age, this is absolutely shocking.

Favored By God, But What Will People Think?

Mary is a virgin, engaged to a descendent of David, a man named Joseph. God sends the angel Gabriel to her, and he greets her, “Hello there, you are so highly favored by God! The Lord is with you!” Mary is “greatly troubled at his words and wondered what kind of greeting this might be.”

The angel delivers the message: “Don’t be afraid! You’ve found favor with God, you will conceive and give birth to a son – he’ll be the Messiah, reigning on David’s throne, his kingdom will never end…” The fulfillment of all the old promises! The shepherd who will lead faithfully!

It’s exciting, almost unbelievable news! But Mary starts thinking about the implications and puts the brakes on. “How can this be? You know I’m not married yet, right? I’m a virgin.” 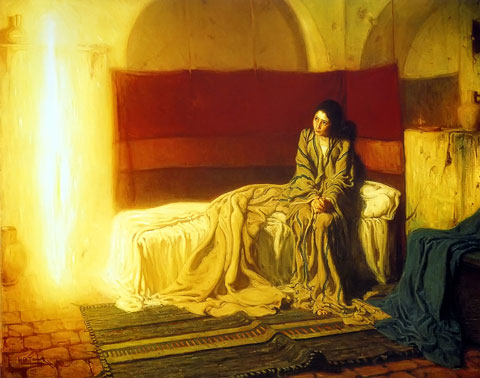 There’s the big question: “How can this be?” God is fulfilling his promises like this?!? Why me? What will people think? How do I explain this to my parents? To Joseph? Will he still want me? Who in the world is going to believe this? Will I ever marry at all? What does this mean for the rest of my life? People will think I’ve sinned… what will they do with me?

Gabriel answers, “You’re asking the wrong question – it’s not the know-how, but the know-Who… The Holy Spirit will do it… and your son will be called the Son of God.”

Thanks for the Favor, God

All of this happens to Mary because, as the angel told her, she is “highly favored by God!” A lot of people today seek God’s favor in their lives. You can buy books in Christian bookstores that claim that God’s favor means you get an upgrade from coach to business class or you get a good parking spot at the mall during the Christmas shopping season.

But for Mary, God’s favor meant misunderstanding and public humiliation, a scandalous, life-altering pregnancy, the stares and whispers of her friends and neighbors, a child born out of wedlock who would eventually be executed as a criminal at a young age… Greetings you who are highly favored!

God had made outrageous promises to his people, and now they were being fulfilled, but not in the way that anyone expected, and it was going to cost Mary greatly to say “yes.”

Blessed is She Who Believed

So it is quite remarkable that she still responds to this whole situation with a wholehearted YES.  “Here I am: the Lord’s servant,” she said, “May it be to me just as you have said.”

This is one of the most remarkable prayers of all time.

Mary was going to give birth to the One who would fulfill the promises and bring forgiveness and salvation to Israel… but it was not going to be an easy road. She knew she was signing up for misunderstanding and whispers for the rest of her life, but she still said “Yes.” She sacrificed her understandable personal desire for a normal life in order to receive God’s promise, not just for herself, but for the whole world.

She goes to visit her relative Elizabeth and it keeps getting stranger: Elizabeth sees her and announces – “Blessed are you among women!” Blessed among women? From the outside it looks more like a scandal than a blessing.

Elizabeth continues, though! “Blessed is she who has believed that the Lord would fulfill his promises to her!” The scene is almost comical when you think about it… God makes outrageous promises about saving the whole world through Israel, and now he’s bringing it to pass through the scandalous pregnancy of a nobody nothing girl from a nowhere town.

Blessed is she who has believed that the Lord would fulfill his promises to her. And despite the difficulties ahead, she bursts into song, praising God for his faithfulness.

“My soul glories the Lord,
and my spirit rejoices in God my Savior,
for he has been mindful of me,
done great things for me.
He has scattered the proud,
brought down tyrants from their thrones,
but lifted up the humble,
filling the hungry with good things,
sending the oppressors away empty.
He has helped us, remembering to be merciful to us,
just as he promised.”

We Don’t Know How, But We Know Who

“May it be until me just as you have said.” Mary’s response to this joyful, confusing, frightening encounter can be ours as well.

Despite it not looking like you expected, despite the difficulty and hardship of it, despite the pain of embracing it, blessed are you who have believed that the Lord would fulfill his promises to you.

Blessed are you who keep praying, hoping, and dreaming when you are tempted to give up, when voices in your head and outside your head tell you it’s foolish to keep believing after what you’ve gone through.

Blessed are you who continue to believe even after disillusionment and heartbreak, who somehow keep singing “My soul glories the Lord, for he has done great things for me” even when God fulfills his word in strange and disturbing ways.

Blessed are you when you trust the One who is always with you even when you don’t know how it will possibly work out.

No Way To Really Prepare

In many ways we are really unable to prepare that well for God’s fulfillments: they are almost always unexpected, almost always strange, but also almost always filled with joy. So we can, with Mary, boldly announce the fulfillments of the promises God has made, knowing that it probably won’t look like what we had in our heads.

Knowing that we are likely to encounter difficulties and suffering we never imagined when we first said yes, but also knowing that we are highly favored by God and the Lord is with us. Blessed are we when we believe the Lord will fulfill the promises he has made to us.

So if you’re looking at something that seems impossible today, and asking with Mary, “How can this be?”… hear the word of the Lord: “The Holy Spirit will…”

Let’s respond with Mary, “I am the Lord’s servant. May it be unto me according to your word.”

A Prayer of Response

Come, Lord, come,
restore us now
and make your face shine on us,
that we might be saved. Amen.