When it comes to economics, most of us tend to think only in terms of money, and the common assumption is that economics is a zero-sum game. This means that we assume that our economic gain can only come from someone else’s economic loss, and vice versa. When we add up the gains and losses, the sum will total zero.

But when we examine the teachings of Jesus, it appears that the economics of God’s kingdom are completely different. In God’s economy (which is more than money), giving and receiving are two sides of the same coin. You don’t get one without the other. It’s never a zero-sum game.

For example, in Matthew 18:21-35, Peter asks Jesus a question that reveals he believes forgiveness to be a zero-sum game: “Lord, how many times shall I forgive my brother or sister who sins against me? Up to seven times?” Jesus answers him first by upping the ante to 77 times, then by telling him a parable.

The parable is about a king who forgives a servant an astonishing amount of debt (something like $6 billion). This servant then proceeds to violently attack a fellow servant who owes him a comparatively small amount of money (maybe $8000). The king hears about this and “un-forgives” the debt and throws the servant into prison.

The point of Jesus’ parable seems to be that the servant never truly understood how much he’d been forgiven, otherwise he would have had the same generous attitude of the king toward his fellow servant. He thought forgiveness was a zero-sum game, meaning that if he gave it away to others he wouldn’t have any for himself. He didn’t understand the kind of blessing that was flowing into his life through the forgiveness of the king, and therefore chose not to live in the abundance of that kind of generosity. He ended up experiencing the kind of scarcity he was expecting.

Later on in the same passage (Matthew 19:16-30), after a rich young ruler walks away and Jesus announces how difficult it is for the rich to enter the kingdom of God, the disciples begin to worry that they’ve made a bad investment by following Jesus. Peter again speaks for the group, “We have left everything to follow you! What then will there be for us?”

Jesus’ answer again is a resounding No to their scarcity mentality, their assumption that God’s economics are a zero-sum game, that the things they have sacrificed are lost forever. He tells them “everyone who has left houses or brothers or sisters or father or mother or wife or children or fields for my sake will receive a hundred times as much and will inherit eternal life. But many who are first will be last, and many who are last will be first.”

Because of the generosity of our king, who has lavished every spiritual blessing on us in Christ Jesus, we can be confident that anything we commit to God will grow in his kingdom into an abundant source of blessing to others. That the economics of the kingdom aren’t a zero-sum game, that the only way to participate in God’s economy is to be generous, trusting that giving and receiving are two sides of the same coin, trusting that it is actually impossible for us to give and not receive.

It may be at some other time, in the form of some other capital, but Jesus’ promise is that we will receive a hundred times as much because of his generosity. We will reap what we sow. We have received freely so we can give freely, trusting we will continue to receive. When it comes to the most important things in God’s economy (spiritual and relational capital), Jesus’ advice and promise is: “Give, and it will be given to you. A good measure, pressed down, shaken together and running over, will be poured into your lap” (Luke 6:37). 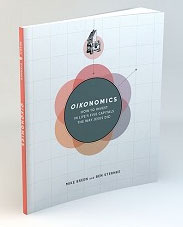 P.S. These are a few thoughts related to a new book I co-wrote with Mike Breen called Oikonomics. You can purchase a copy here.