This is the third part in a series of blog posts that outlines my philosophy and practice of discipleship, a distillation and condensation of the stuff I’ve learned over the past few years from 3DM and many other wonderful people, a (somewhat) coherent “manifesto” on discipleship, if you will. Here are links to the first two posts in the series.

In this post I’ll discuss how I decide who to invite into a discipling relationship.

So we know that discipleship is the process of becoming more and more like Jesus in both character and competency, and that this occurs in a relationship where the discipler is offering their life as an embodied, concrete (and, of course, imperfect) example for others to imitate. But how do you know who to invite into this kind of relationship? I use four lenses to figure this out.

Only a Few at a Time

The second lens is only disciple a few at a time. Jesus taught the multitudes, 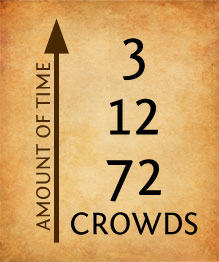 but he only discipled twelve. Jesus prioritized his time this way,  always seeking to find more time with his twelve disciples rather than cater to the crowds. And even within the twelve, there seem to be three that got even more attention and time.

Because of the large amount of time you’ll need to spend with people to actually disciple them, you’ll need to stick to discipling a few at a time. If Jesus could do twelve at a time, and he was the best discipler ever, we should probably round down from there. I suggest 5-8 people.

Look for People of Peace

The third lens is to look for people of peace. This phrase is taken from Luke 10, and simply refers to people who welcome you, who like you, who want to be around you, and who serve you. As you cast the seeds of vision for discipleship, watch for where the crops start coming through the soil. Don’t spend time trying to convince people who aren’t sure, because it’s impossible to disciple someone who isn’t open to you. It’s frustrating for both you and them.

The other thing about people of peace is that they are available and ready to invest the time and energy needed to be discipled. It takes a lot of time and energy to grow as a disciple, and I don’t make any apologies for asking people to step up to it. Some people are simply unavailable for the kind of commitment it takes to do this.

The fourth lens is, within those who are open to you (people of peace), prioritize investment in higher-capacity leaders. This lens can sound a bit utilitarian, but really it’s just an application of Paul’s command to Timothy: “The things you have heard me say in the presence of many witnesses, entrust to reliable people who will also be qualified to teach others” (2 Tim 2:2). The reality is that some people have more leadership capacity than others. Moses chose some to be leaders of ten and others to be leaders of a thousand. I’m sure the selection wasn’t random.

Leadership capacity can be graphed on a bell curve. Most people are in the middle, with a few outliers on either side. 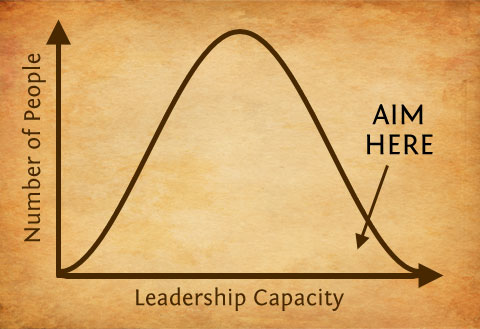 To use Paul’s language, be on the lookout for for “reliable” and “qualified” people, because they will have the best opportunity to “teach others.” The reason is that your goal isn’t to personally disciple everyone in your church. Your goal is to create a culture of discipleship, where those you invest in will in turn invest in others. Discipling “to the left” is much easier than discipling “to the right,” so you need to think about capacity or you’ll stunt the growth of the discipling culture.