This is the second part in a series of blog posts that outlines my philosophy and practice of discipleship, a distillation and condensation of the stuff I’ve learned over the past few years from many wonderful people, a (somewhat) coherent “manifesto” on discipleship, if you will.

(Thanks to Andrew Dowsett, whose succinct blog post helped crystallize my thinking on the nature of the discipling relationship.)

Even if we know what discipleship is, the question arises as to how we become more like Jesus in character and skill. For example, there are a lot of great resources out there nowadays. Perhaps we can simply find a few good books and be discipled “remotely” by authors. Or perhaps if we just pray a bit more and read the Gospels a lot we can be discipled directly by Jesus. After all, that’s the source, right?

It just doesn’t work this way. As helpful as prayer, Scripture, and authors are, and as good as it might sound to just be a disciple by myself (especially to those who’ve been burned by the church), discipleship is an inherently relational thing. Jesus called his disciples to literally follow him around, not just read the Torah and pray more. Paul told the Corinthians to imitate him as he imitated Christ, not to simply imitate Christ.

We aren’t discipled directly by Jesus. We aren’t discipled remotely by authors. We can’t get what we need by simply digesting the right information. The New Testament pattern seems to be that we need a flesh-and-blood person to disciple us. A living example to look at and follow. Discipleship is relational. You can’t do it without being with people.

But what does the relationship look like? I know people who tell me they’re “sort of” discipling someone, or meeting occasionally with someone “trying to have some influence.” After seeing and being part of many of these kinds of relationships, I think it’s safe to say that they really don’t bear much kingdom fruit. They are too fuzzy and ad hoc to gain the momentum and traction necessary for people to grow. They suffer from a lack of definition.

An assumption that lies underneath these ill-defined relationships is that discipleship ought to be a mutual/peer-oriented process. “We’ll disciple each other” sounds humble and makes everyone feel comfortable. The only problem is that it doesn’t work.

Don’t get me wrong: mutual edification is a good thing, it’s just not a great strategy for building a discipling culture. If you look at the New Testament pattern, discipleship is a process of being led by someone, imitating their faith. Jesus called the disciples to follow him, which meant they dropped what they were doing and did what he was doing. Jesus did not join Zebedee’s family fishing business and say, “Let’s just try to disciple each other. I’m sure I have a lot to learn from you.” Paul did not tell the Corinthians “Let’s imitate each other.” He said, “Imitate me as I imitate Christ.”

We are equipped to be and do like Jesus by another person who is further along in those areas than we are. In other words, discipleship is a directive process, not a “mutual edification” process. As good as mutual edification and other kinds of “peer” processes are (we do many of our Missional Community gatherings like this), I believe if we try to do discipleship this way, our attempts flounder and stall, because typically we end up with several highly-gifted leaders sitting in a room edifying each other, when each one of them could be out there making new disciples and leading less mature Christians into greater fruitfulness and maturity.

Again, I’m not against mutual edification, but I think much of the current emphasis on mutual/peer/consensus relationships is an over-reaction to dictatorial forms of leadership. We’ve thrown the baby (directive leadership) out with the bathwater (control-freak authoritarianism) and the result is that discipleship stalls because nobody is willing to call others to follow them as they follow Christ. The living water that’s meant to be flowing through each of us collects into stagnant reservoirs.

Here’s a helpful lens from 3DM that helps illustrate the importance of imitation in discipleship. 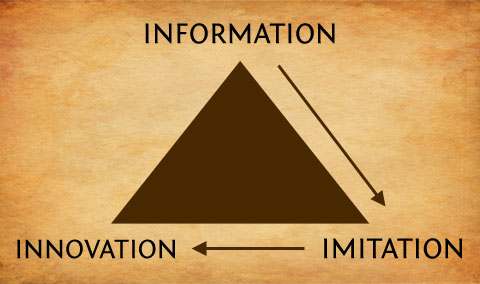 The goal is “innovation,” where disciples of Jesus are living out their missional call, joining with Jesus in his work in the world. But we can’t get there by simply having good information. We need an embodied, concrete example to imitate.

Discipleship is about being led by someone, it’s about following a flesh-and-blood person who looks more like Jesus than I do. It’s about learning to do something I don’t know how to do yet, and thus submitting myself to someone else’s leadership. Eventually, then, it is about learning to lead, calling others to follow you as you follow Christ. Another way to say it is that everyone looks like a sheep from the front and a shepherd from the back. We can be disciples and make disciples if we acknowledge this reality and embrace it, imitating the lives of those we are following, and calling those we lead to imitate our lives.