I remember the sinking feeling in my stomach. I had just shared in a small group meeting that I felt God was leading me toward greater discipline in a few areas of my life.

But the leader of the group did one of those “YesButs.” You know the kind. Technically they are agreeing with you, but really they are correcting you. “Yes, but…”

This well-meaning leader felt it necessary to remind me (and the whole group) that it was all about God’s grace, and we can’t make God love us any more or less through our obedience.

We moved on quickly to the next person, and I was left feeling discouraged. I really did feel God was leading me toward putting some effort into my faith, but whenever I shared these kinds of thoughts, it seemed that people would nervously talk about grace and change the subject.

Grace or effort: pick your poison

Their anxiety about this topic is understandable. A prevailing popular theology of our day seems to offer us only two choices when it comes to God’s grace and our effort.

(By the way, it says something significant about us as a society that the only possible motivation we can imagine for putting effort into our faith is to “earn” something.)

I’ve seen people swing between these two extremes their whole life. One season they’re working like maniacs to be “better Christians.” Next they’re shrugging at everything and abandoning every recognizable Christian discipline in the name of “grace.”

This view of grace dominates our imaginations to the point that we cannot fathom how grace and effort could possibly work together. They feel like opposites on a sliding scale, so that any move toward effort is a move away from grace.

[tweet “Many people assume that any move toward effort is a move away from grace.”]

This is why the leader of my small group felt it necessary to warn us all off the ledge when I mentioned a desire to becoming more disciplined in my faith. He saw no other way of understanding what I was saying except that I was sliding toward legalism.

Doomed to be merely forgiven

If we are going to embrace God’s grace, then, it seems we are doomed to be “just forgiven,” as a popular bumper sticker proudly proclaims. But doesn’t it seem like there ought to be more to following Jesus than just forgiveness?

[tweet “It would seem that if we are going to embrace God’s grace, we are doomed to be ‘just forgiven.'”]

Greg Boyd shares a story that illustrates this conundrum very well. It’s such a good example that I’m going to share it in its entirety:

About 25 years ago I was traveling on the freeway to somewhere or other and I stopped at a truck stop to get a bite to eat. I sat down at the counter next to this scruffy truck driver who had just started his lunch, and we started up a friendly conversation. Within about fifteen minutes the man was bragging to me that he was strung out on cocaine, that he had had great sex with a girl he met in a bar the night before, that this sort of thing typically happened a couple times a week, and that his live-in girl friend of seven years pretends not to know about it because her two kids needed a dad. He seemed to think this was funny.

When he’d finished his colorful monologue, he asked me what I do for a living, to which I responded that I was a pastor.

His immediate response was, “Oh sh*t!”

He quickly apologized, telling me I didn’t look or act anything like the pastors he knew. “You should wear a collar or robe or something to warn people,” he said. I assured him I had no interest in judging him, since I myself am simply a forgiven sinner. I then told him he too could be forgiven and transformed by the love of God if he entered into a relationship with Jesus Christ. His response was rather interesting.

“Oh, I know about all that pastor,” he said. “I’ve already accepted Jesus as my savior.” “That’s great,” I said, trying not to sound surprised. “Yes sir,” he said. “My grandma had me go forward and pray the sinners prayer when I was five.”

The trucker then explained that he gave up on religion in his early teenage years, but he never forgot that, because he’d accepted Jesus, “God doesn’t see my sin any more.” I inquired how that worked – an all-knowing God unable to see something. “God sees me through ‘Jesus spectacles!’” he exclaimed, almost in a southern preacher’s voice. “He doesn’t see my sin; he sees the blood of Jesus!”

How could something as wonderful as salvation be so utterly powerless and uninspiring? Yet this is the often unspoken conflict happening in the minds of Christians when talk of discipleship or mission comes up.

How grace and effort work together

The thing that the trucker (and a lot of us) have wrong is that God’s grace and our effort were meant to work together.

[tweet “God’s grace and our effort are meant to work together.”]

I find Dallas Willard’s phrase very helpful here: “Grace is not opposed to effort, but to earning.”

Earning is an attitude, while effort is simply action. Embracing grace means we know that we haven’t earned a thing in our relationship with God. But that doesn’t mean we don’t take action!

In fact, it seems we need to take action if we are going to remain inside the grace being offered to us.

“Continue to work out your salvation with fear and trembling, for it is God who works in you to will and to act in order to fulfill his good purpose” (Philippians 2:12-13).

Did you catch that? “Work out your salvation… for it is God who works in you…” It’s grace and effort working TOGETHER! God’s action and ours together to create action and desire that fulfills God’s good purposes for us.

“Contrary to the grace versus ‘works righteousness’ dichotomy that became popular after the Reformation, it takes a lot of practice to remain fully open to undeserved and unmerited grace.” – Richard Rohr

A diagram may help. Since grace is not opposed to effort, the line diagram above doesn’t work. Instead, grace is opposed to earning. Effort, then, is simply opposed to no effort.

We can look at it this way: 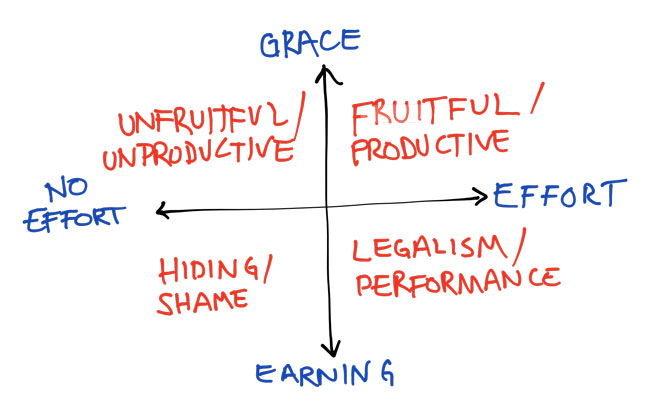 In other words, when it comes to following Jesus, “You can’t do it alone, but it will not be done for you.”

[tweet “When it comes to following Jesus, you can’t do it alone, but it will not be done for you.”]

You need both grace and effort to follow Jesus. Both ingredients are vital in spiritual formation. Without God’s grace, there’s no hope! But without effort, all the potential will lie dormant. Growth simply doesn’t happen unless you embrace both.

Let’s examine how the quadrants of this tool function.

No grace, no effort = hiding/shame

When we have a sense that we need to earn our salvation, but out of fear we take no action, we find ourselves in a place of deep shame.

We’re officially legalists (since we feel we must earn salvation), but we’re not even trying. So we hide in shame. People typically don’t live here for very long because it crushes your soul. Eventually they find their way into one of the other quadrants…

We trust our efforts to earn us something. We depend on our action, rather than the grace of God.

Eventually we begin to feel that we deserve things because of our faithful performance. While there is nothing wrong with the efforts themselves, when our attitude shifts to feeling we have earned something through them, we become like the elder son in Jesus’ parable.

We exclude ourselves from the party because we can’t participate in unmerited grace. We’re hard-working legalists, earning every penny of salvation from God.

If we believe there’s nothing we can do to earn salvation (grace), but never put any effort into our faith, we end up unfruitful and “unproductive,” in the words of the apostle Peter.

In his second letter, he emphasizes grace and effort together (just like Jesus, just like Paul… it’s all over the place!).

Out of his grace God provides all we need for a godly life, but to make it effective in our life, it’s necessary to “make every effort” to add to our faith!

Peter tells us the reason we add to our faith is that it will “keep you from being ineffective and unproductive in your knowledge of our Lord Jesus Christ” (2 Pet 1:8).

In other words, it’s possible to be ineffective and unproductive in your faith. How? By embracing grace but never putting any effort into training.

[tweet “It is possible to be ineffective and unproductive in your faith. But why would you want to be?”]

This is the plight of the younger son in Jesus’ parable. He knew his inheritance belonged to him, but he squandered it because he made no effort to learn how to invest it wisely or productively.

Ineffectiveness and unproductivity don’t disqualify you from grace. You’re still part of the family. But unfruitful and unproductive members of a household are called children. Children are wonderful, but their purpose is to grow up and become mature, effective, productive adults.

Grace and effort together = fruitful and productive

When we embrace the attitude of grace (“I deserve none of this goodness!”), and combine that with wise and disciplined effort (“work out your salvation”/”add to your faith”), we find ourselves fruitful and productive.

How to start embracing grace AND effort

If you tend to be a legalist, your top priority will be to learn to embrace the grace that embraces you. You’ll need to believe with all your heart that you can’t do it alone.

Here are some ways to begin:

Here are a couple great books that will help you embrace grace:

On the other hand, if you tend to be unproductive, your top priority will be to learn to embrace effort as the pathway toward fruitfulness.

Here are some ways to begin:

I’d love to hear from you. Where do you lean? What do you need to embrace? Let’s go for the top-right quadrant, working out our salvation, because it’s God who’s working within us.