All the recent brouhaha over hell, universalism, etc. brought about by Rob Bell’s new book got me thinking about a little theological idea I’ve been playing with for awhile. It’s really just a undeveloped, niggling idea I’ve had that I want to throw out here on my blog to see what y’all think.

What if God’s wrath is simply a pre-emptive strike on the degrading power of sin? 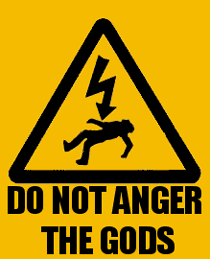 Sometimes we conceptualize God’s wrath as the same kind of thing as when parents get frustrated that their kids don’t put the milk back in the fridge after they use it. But what if it’s more like an intervention? What if God sees the powerfully degrading affects of our sin and seeks to jar us awake before we quietly slip into a coma we’ll never come out of?

And what if the true horror of the destiny of those who refuse to be woken up is not that God’s wrath rests on them eternally, but that his wrath is withdrawn from them, signifying a final end to God’s pursuit of them?

Also: After Jesus’ death on the cross, God seems to deal with humanity differently than he did before. Should this play into our thinking about God’s wrath?

So there you have it, just a few thoughts. Possibly heretical. What do you think?