Yesterday my daughter asked me why the song talked about the “Twelve Days of Christmas.” Like most people, she thought Christmas was just one day.

But according to the church calendar, there really are twelve days of Christmas, spanning the few days from Christmas Day to Epiphany Day (January 6).

In the lectionary for today, the Gospel reading is Luke 2:22-40, where Joseph and Mary take the infant Jesus to the temple to be consecrated. Two strangers, Simeon and Anna, both prophesy about the boy, to the wonderment of his parents.

Simeon’s song is one of rejoicing that he had seen the Messiah, that God was coming to save his people.

But then he turns to Mary and speaks some darker words.

“This child is destined to cause the falling and rising of many in Israel, and to be a sign that will be spoken against, so that the thoughts of many hearts will be revealed. And a sword will pierce your own soul, too.”

It would appear that although God’s salvation had appeared, that the victory had not yet been won. Though Simeon can confidently prophesy light for the Gentiles and glory for Israel, he also seems to know that these fulfillments won’t come easy.

There will be falling and rising. There will be speaking against. Hidden thoughts will be revealed. Swords will pierce souls.

This is the dark side of Christmas. God is bringing the fulfillment of all his promises, but that means confronting the powers that currently control and oppress the world God loves. And that means the path to the throne goes the way of the cross. Already there are hints that the way up is the way down.

The Thoughts of Many Hearts Will Be Revealed 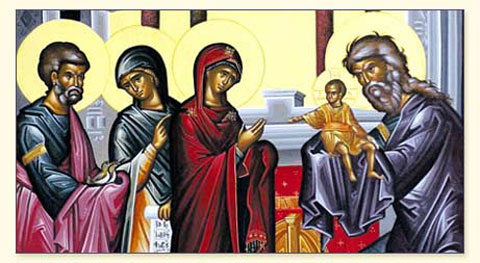 Simeon’s prophecy that Jesus will reveal “the thoughts of many hearts,” is of course just what prophets do. They reveal the things that are carefully hidden most of the time. Through their very existence they cause hidden motivations to be revealed.

The prophet becomes and embodies a word of truth that draws hidden realities to the surface for all to see. Philosopher Slavoj Žižek calls this “the irruption of the Real.” Often the prophet reveals power dynamics and the violent intent those in power have to keep and defend their power.

Jesus’ prophetic actions (healing on the Sabbath, for example) and corresponding words exposed the insecurity and desperation of the leaders of Israel, and brought about their shocking intent to murder him.

Truly prophetic actions will very often expose murderous intent. The very personal intent of the religious leaders to get rid of this specific man, and the more general intent of Empire to simply “deal with” disturbances of the “peace” (another word for “status quo”).

His whole life is leading toward a final showdown with the powers that be. In the end, the most advanced religious system of the day and the most sophisticated political system of the day conspired together to murder the only Perfect Man. It was the ultimate irruption of the Real.

So there is a dark side of Christmas, because the final victory hasn’t yet been won. In the midst of the angel songs and manger scenes and raptures of joy, we also remember that the only path to resurrection goes through the cross.

Let’s embrace it again today, trusting Jesus when he says, “whoever loses their life for my sake will find it.”