One way to get into trouble, theologically speaking, is to hold tenaciously to one aspect of the truth to the exclusion of counterbalancing truths. In fact, this is how people get into heresy: taking one aspect of the truth and making it the whole, entrenched on one side of a false dichotomy. Learning to embrace BOTH/AND thinking is really important.

I was reminded of one of these important BOTH/ANDs when I was listening to a talk from Dallas Willard. He was talking about the ways that both liberals and conservatives miss the point of the New Testament. The liberal mistake is to emphasize structural and social evils but neglect the more personal, covenantal aspects of salvation. The conservative mistake is exactly the opposite: emphasizing our need for forgiveness and personal redemption to the neglect of structural evils.

Willard was encouraging us to “step through to the center” and lift up Jesus as the king who has a kingdom. “The proper hermeneutic of the New Testament, I believe, is a picture of how this vision of the kingdom of God and Jesus come together.”

So you have Paul, at the end of the book of Acts, preaching the kingdom AND teaching about Jesus (“He proclaimed the kingdom of God and taught about the Lord Jesus Christ”). It’s about BOTH Jesus AND the kingdom of God. Bringing them together makes all the difference. 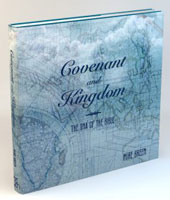 The way 3DM talks about this is to say that the story of the Scriptures is basically about covenant and kingdom (hardcover or e-book). The DNA that weaves itself through the Bible is a double helix of coming into covenant relationship with God (through Christ) and moving out as his kingdom representatives (with Christ). We are adopted into the family and given responsibility in the “family business.”

It’s about BOTH forgiveness of sin AND freedom for the captives.

It’s about BOTH a perfect substitute taking our place AND a permanent victory over the power of evil.

Any time we try to lift one aspect up to the exclusion of the other we end up with an incomplete and weak version of the gospel that can’t do everything it is meant to do. Let’s be BOTH/AND people in this regard and learn to do what Paul did: proclaim the kingdom of God and teach about the Lord Jesus, preaching the gospel in both its covenantal and kingdom aspects!